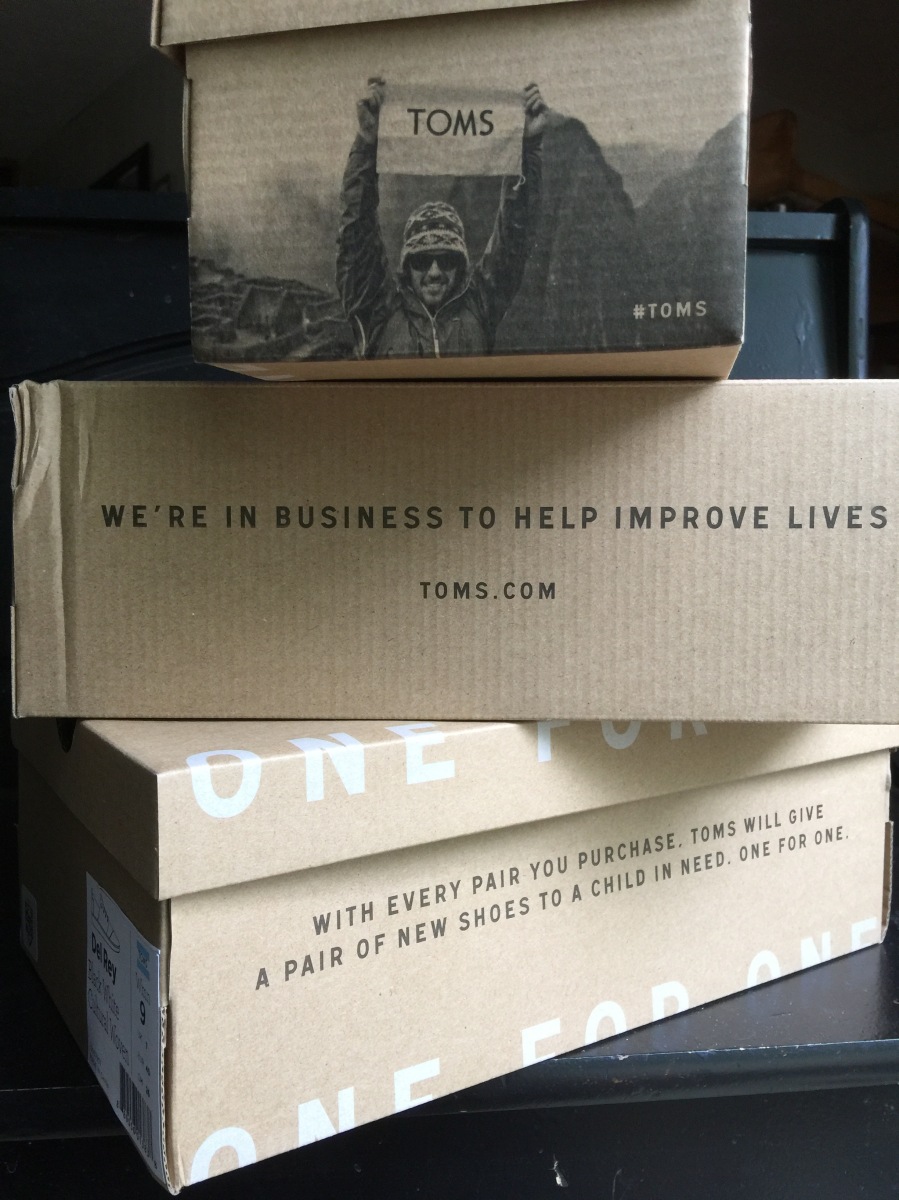 My husband asked me while we were walking to the restaurant we finally settled on, “How many Tom’s do you have?” My mind had been wandering and I snapped, “This is not a conversation I want to have.” Not only did I not know the answer to this question, I immediately got defensive.  I thought of all the things he collects: shoes, shirts, Michael Jordan memorabilia.  So what if I have found a style of shoes that I like? I don’t spend money on nails or fancy clothes.  I buy cheap make up, about once a year.  I get $15 hair cuts.  My mind went through all of the justifications for this one indulgence, shoes with personality.  The fact that another person gets a pair when I buy one makes me happy.  The conversation with my husband went no further, none of these thoughts in my head were shared.

Days later I found a huge box at the front door, left by a sneaky UPS man who managed to approach without rousing our dogs.  Addressed to my Chef, return address Toms.  Having tried for years to get him to try them, he finally bought some for himself last summer.  I suspected he was adding to HIS collection. I texted him while he was at work that his package had arrived.  His reply: Happy Anniversary.  You can wait until I get home or go ahead!

So he was setting up the question, how many do you own because your count is wrong.  I bought you more!  Damn it.  Why am I so closed off that my first instinct is to protect, to run for cover? In June we will have been married 16 years, together almost 4 before that.  The storms we have weathered would make a sailor raise his cask of rum in admiration.   I have always been independent but not this alone.  Somewhere over the past year or two, I shut down and have taken too much time starting back up.  Broken trust in a long term friendship has left a scar that seems to still be scabby, hard to heal.   I still hold back the part of me that gives freely, is spontaneous, in the moment, with the person who most deserves that gift.  As I begin to dismantle the walls in other areas, I can’t leave my marital relationship last.  I am consciously trying to be aware of the ways I close him out and then extend an invitation.  It is cool to give shoes to people somewhere else who need them but more important to give me to my husband right here at home.

I don’t know how many pairs of Tom’s I have.  I do know I have been blessed to have a husband who keeps knocking at the door, trying to get back in.  I receive grace from him, again and again.  I have a month before my anniversary.  I know the perfect gift, if I have the courage to give it.