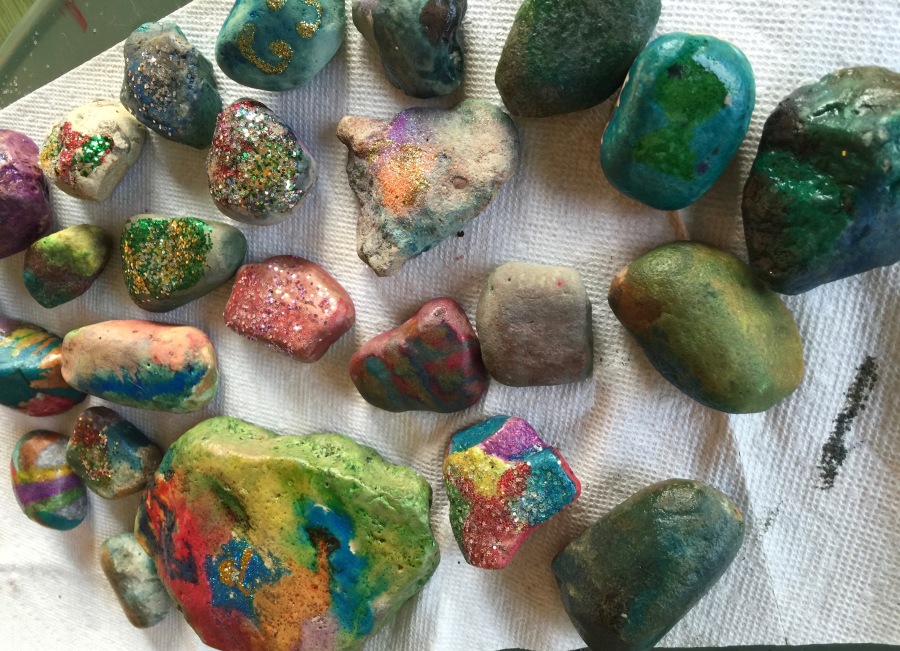 You know those really cute rocks that people paint to look like lady bugs or butterflies?  Or maybe they put watermelons or basil leaves on there to mark their well-weeded garden? My life is not like that.  We coated rocks with preschool water color paints, about 6 plastic slabs of them in various state of destruction.  We used the paint brushes that come with the sets, no true artist would ever touch these I am sure.  Because we were feeling extra saucy, we added glitter, both the glue and sprinkle variety.

We selected rocks from my Chef’s well landscaped path, initially just one at a time and then eagerly selecting one for each other on our trips around the side of the house, maybe two or three.  I painted the whole rock one color and then tried to decide what to do next while my 5 year old grandson merrily dabbed here then there, announcing it looked “fantastic.”  And it did. His freedom to play was inspiring, joyful, messy.  He asked if I needed help, he gave me pointers as only a child can.  “Do this, Gran.  Nan, watch how I made a new color.  Do you like this?” As a lover of all things green, he delighted in the green rock I painted with gold glitter in his initials. “Magnificent,” he proclaimed.  His pace became frenzied as he threw himself into the event, splashing colors, mixing hues.  “Oh Gran, this is fascinating!”

His rocks were spectacles of color, blending, running, mixing.  Was he really using the same 8 color palette as me? Chef joined and I watched as his rocks, like mine, were ordered, lines clearly marked.  His colors were perfect. (I think he could make those ladybugs and butterflies.) Plum offered to help his Grandpa too, who resisted.  He had his project under control.  He cringed at splashing paint as Plum’s exuberance took hold, worried about glitter on his pants.  Yet when I look at our now dried rocks, the most glorious ones are the those adorned by Plum.  He got it right.

I was reminded that my  God doesn’t see just an 8 color palette.  Children, having just come so soon from God, haven’t forgotten how to listen to Him, how to see Him in the world.  When we let them teach us, we see so much of Him, directly into His eyes. He has to be cringing when we draw lines that separate His beautiful people, robbing ourselves, our world of real glory.  We make children stay in the lines, use one color at a time, clean your brush, be careful.  We teach children to hate, separate, dominate.  What a shame we teach joy out of them, replace it with eyes that see only an 8 color palette.  For one day, I followed the lead of this child, letting him instruct me in producing colors I had forgotten how to make, how to see.

We painted rocks.  Aren’t they fascinating, magnificent, amazing? Glory be to God.