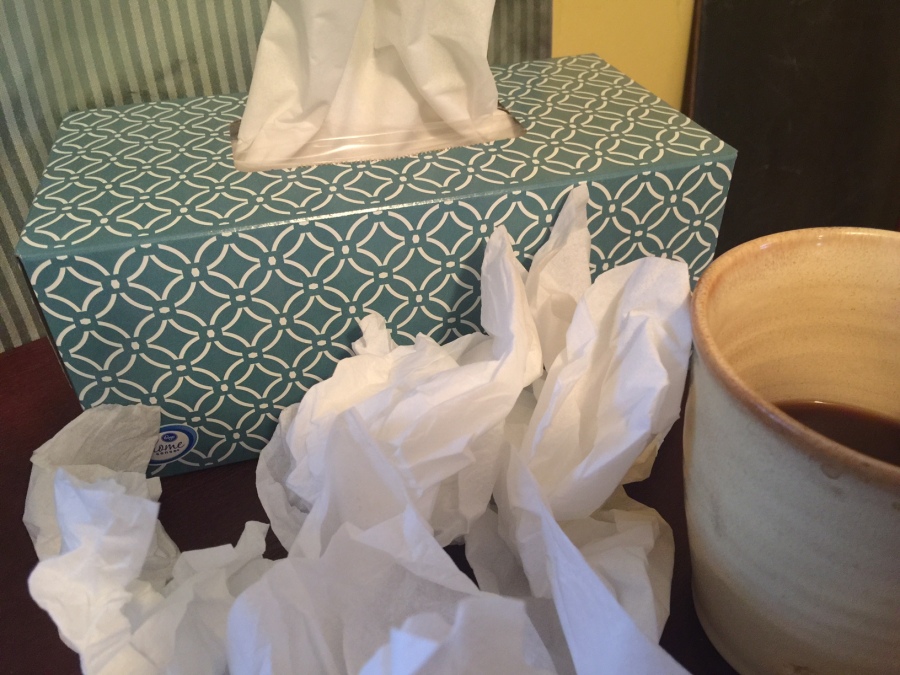 Tissues piled on the table, a glass of orange juice and a cup of hot tea, trashy tv that requires no mental faculties, a warm blanket, all indicators that a virus has hit. I lay on the couch searching for self-pity but none comes. It is just a cold, just a dumb sinus thing and how blessed am I that it waited until after the new baby, after school started, after Christmas and all the celebrations? So I snuggle under the blankets and Chef brings more tea and I doze, floating along in a daze, remembering that rest is healing.

When my children were little, I told them the fighter guys inside of them worked while they slept, that is when they got better. I explained those guys were too busy during the day dealing with all the stuff of just making their bodies work, so at night while they slept, or during the nap I was trying to convince them to take, that is when those guys could work on just the sickness. Medicine was extra fighter guys, sometimes we needed back up. I tell the same thing to Plum, he is more skeptical than my Stella and Arrow were. I often have to get more realistic with him, remind him the doctor always says rest and fluids, get some back up of my own. They slept, he sleeps, I slide into unconsciousness on the couch to the sound of trashy tv and dream of fighter guys healing me, a days gone by when I nursed my children.

The hot tea I drink, a new addition to my fluid choices. After at least a year of me saying I don’t like tea as we met weekly, Janet offered up a cup of the one I thought smelled so good. I curled my lip, I wrinkled my nose, I prepared to waste the cup she brought to me. I already knew the aroma was enticing, still I hated the flavor. I was sure. Yet I sipped, just one tiny taste so as not to be ruder than I already was and then discovered like many times at Janet’s house I had to deliver my “I was wrong” speech. She most often already knows and patiently smiles without telling me so. Like the silent fighter guys, there is healing in trying new things and especially in admitting our own mistakes. The tea I drink now replenishes the fluids I lose when I blow my nose every 10 minutes, warming my hands as I clutch the mug, reminding me of soul healing on better days. The blessing of friendship hovering like the steam that wafts with each new portion.

Chef attends to me, so much sweeter than I when he is sick. I am an impatient nurse to him, physical needs met and then out the door. Maybe more like an orderly, just dropping off food, cleaning up the tissue pile, next dose of meds administered, on to the next patient. I am blessed that my Chef is willing to bring more orange juice even when it isn’t time for rounds, that he will watch dumb tv with me and get up 100 times to deal with the beasts. He offers food multiple times and makes sure I have taken meds. He lets me rest, allows my fighter guys do their thing. He doesn’t add the emotional toll of making me feel like a burden, something I need to work on. Especially because I heard him sneezing yesterday. More tissues, more tea. More rest. As I heal, I must remember that sometimes sickness looks different, sometimes fighter guys need  back up doing waking hours. My Chef deserves a more attentive nurse, more than tea refills.

This forced slowdown is a chance to focus, to zoom in on either myself and my misery or on just how very blessed I am. As the tissue pile grows higher I can’t help but choose to list   all that is right in my world. Maybe I have a fever, maybe I have completely lost it, but laying on the couch with a warm blanket covering me, surrounded by evidence of love and the healing nature of my God, I can barely utter a worthwhile moan. Maybe it is appropriate to begin the new year resting up and drinking more tea, with fighter guys working extra hard. With no crystal ball to see what is ahead, never guessing all that 2016 would have brought, I consider my choices. Sink or Swim? I hope to share more healing this year, less germs and viruses. I hope to remember how it feels to be cared for when I am weak, how freeing it is to admit when I am wrong, how to generously accept others admissions. I hope to swim in a pool of gratitude, never sinking into despair or self-righteousness, ugly viruses that spread more readily than the flu.

May your year find less piles of tissues, extra fighter guys while you rest and many ways to nurture those around you. Warm mugs of tea, trashy tv and cozy blankets during the cold days ahead, shall we count our blessings with each other?

2 thoughts on “Gliding into Gratitude”